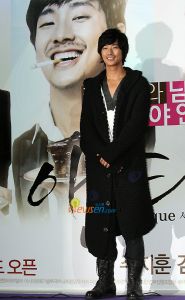 He returning to the screens! Who?

He is costarring with Kim Jae-wook, Yoo Ah-in, and Choi Ji-ho in the new movie, "Antique".

The story is originally from the popular Japanese comic book about a mysterious heir to a company (Ju Ji-hoon), feindish homosexual patisserie genius, an apprentice who was a boxing champion (Yoo Ah-in), and a handsome troublemaking body guard (Choi Ji-ho) who come to this cake shop called "Antique" and reveal their unique fun lives. It is a moving and comic movie you must definitely watch!

These young characters motivate the sense of taste for customers that come in for cake along with the lovely and luxurious antique interior greeting them with their handsome faces. Their deep secrets will be revealed in this movie that will be released on the 13th!

"[ChanMi's movie news] Ju Ji-hoon in "Antique""
by HanCinema is licensed under a Creative Commons Attribution-Share Alike 3.0 Unported License.
Based on a work from this source