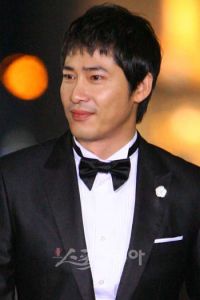 Kang Ji-hwan who has been loved in many previous dramas will be challenged to a new kind of film!

This new film is titled "My Girlfriend is an Agent" which is a real action film.

He is an elite origin who studies abroad and becomes a spy against the Russian mafia who seek to dominate nuclear weapon. He shows off his practiced Russian accents!

This is the comic action film which will give laughter as well as thrill.

The costar will be Kim Ha-neul as spies together, but Kim is the veteran female spy who already has high experience in this profession and the two become rivals.

"[ChanMi's movie news] Kang Ji-hwan in a new action film!"
by HanCinema is licensed under a Creative Commons Attribution-Share Alike 3.0 Unported License.
Based on a work from this source