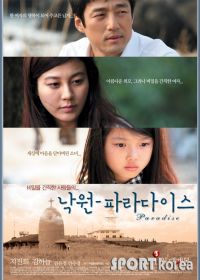 "Paradise" is one of the 7 global project telecinemas that are being produced with top actors, top Japanese writer, and famous drama director.

The 5th project "Paradise" has its teaser poster released !

It is about a man who wants to be a woman's happiness, a woman who has a beautiful face but a secret hidden behind her, and a girl who closed her heart toward the world.

The woman is Mikyeong who just came out of a prison acted by Kim Ha-neul and wishes to live a new life in an island.

She meets an innocent man, Ilho acted by Ji Jin-hee. The characters have their pains healed through the people they meet.

Great acting and deep stories will be revealed through this film released on November 26th!

"[ChanMi's movie news] Kim Ha-neul and Ji Jin-hee in a new melodrama film"
by HanCinema is licensed under a Creative Commons Attribution-Share Alike 3.0 Unported License.
Based on a work from this source