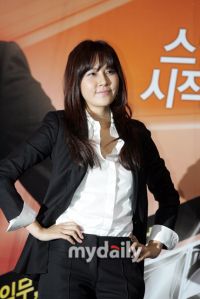 After the hit drama , "On Air" she is coming back through a new film, "My Girlfriend is an Agent!"

Kim Ha-neul has been at the press conference for this new film. Doesn't she look like a tough agent? Maybe she looks more like a lovable agent.

This film is a comic film also starring Kang Ji-hwan.

The film will be released on April 23rd.

"[ChanMi's movie news] Kim Ha-neul in "My Girlfriend is an Agent""
by HanCinema is licensed under a Creative Commons Attribution-Share Alike 3.0 Unported License.
Based on a work from this source