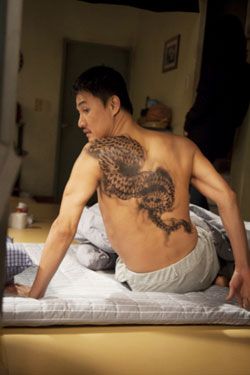 He is in the new film "My Dear Desperado" which will be released in May. He will be Deungchul, a gangster.

This character is same as the character Macho, whom he acted in 1990.

Park Joong-hoon has been casted because of the images that he had through other films like "Nowhere To Hide". He had been a ganster and a hero detective. He can be rough as well as comic. This new film, Park's character is just like that.

You will be able to see his attraction once more enhanced!

It has been hard to see his acting as a gangster since 2000. He had been a detective 5 times, and a gangster 7,8 times. He said that he seems to have connected well with these kinds of people more. In "Haeundae" he was a geologist and no one seems to believe him in the beginning.

For this role, Park Joong-hoon lost 6kg. He wanted to have a sharp image that he even went tanning for 3,4 months. He cut his hair short, and grew out his beard.

"[ChanMi's movie news] "My Dear Desperado" starring Park Joong-hoon"
by HanCinema is licensed under a Creative Commons Attribution-Share Alike 3.0 Unported License.
Based on a work from this source