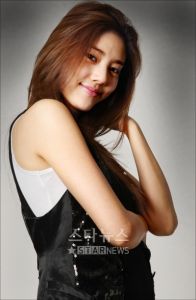 This will be her first Hollywood film, "Hype Nation 3D" a dance music film which Son Dam-bi has been casted in!

She will be working with the dance staff who were in the hit films "Step Up 1,2" "Honey" "Stump" and "You Got Served". The first Korean location for where it will be filmed is to be announced!

Famous stars, director, producer, and music producers are working on this film.

Just like the Hollywood film "Fast and the Furious- Tokyo Drift" this new film will be filmed in Korea! They will be introducing the Korean nation with the number one Break dancers through "Hype Nation 3D".

Korean stars such as Son Dam-bi and Dennis Oh will be in this film showing Korean cities with great visuals for the world to see through this film!