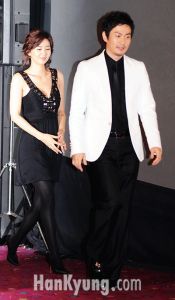 Park Sol-mi, and Park Yong-woo are starring in this film and have come to the press conference for it!

This is a thriller about a man who lost his phone and experiences difficulties during the 128hours later.

The film will be released on the 19th!

"[ChanMi's movie news] Press conference for "Hand Phone""
by HanCinema is licensed under a Creative Commons Attribution-Share Alike 3.0 Unported License.
Based on a work from this source