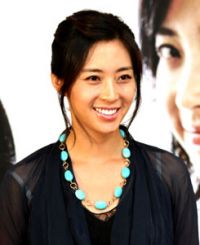 Song Yoon-ah is returning to the movie screens!

She has acted as a old maid reporter who was strict and intelligent in "On Air". Now, she is in "Secret - 2009" as a different character. It has been two years since she has been in horror movie, "Arang".

In this film, Song Yoon-ah is a woman who is blaming herself for losing her child. Her husband, a detective will be acted by Cha Seung-won. This is the second time the two movie stars are acting together, they starred together in "Jail Breakers - No. 815".
"Saving My Wife" is about the wife being caught up in the murder case and then in danger where the detective husband comes along to save her. This thriller film will be be filmed starting next month.

"[ChanMi's movie news] Song Yoon-ah in "Secret - 2009""
by HanCinema is licensed under a Creative Commons Attribution-Share Alike 3.0 Unported License.
Based on a work from this source