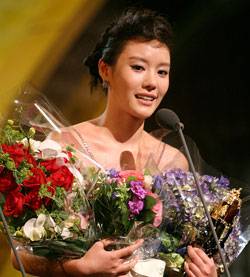 One of the masterpiece films "The Chaser" has been nominated for 11 different awards for the 45th annual Daejong Film Festival that will be on the 27th at Seoul Samsungdong Coex Convention Hall. The festival will be aired in the SBS channel live.

Last year, actress Kim Ah-joong and announcer Choi Ki-hwan received the highest award. Wondergirls who's "So Hot" song is a big hit performed "Tell Me" and Ock Joo-hyun performed a song from the musical "Chicago". We anticipate which performers will be performing in the festival this year.

Films such as "Secret Sunshine", "Seven Days", "The Happy Life", "The Chaser", and "Happiness" were nominated in different areas. Actors and actresses like as Kim Yunjin, Kim Yun-seok, Ha Jung-woo, Hwang Jung-min, Im Soo-jung, Jeong Do-Yeon, Song Kang-ho, and Jang Keun-suk were nominated also, along with their directors.

Many movie stars from various films from this year will be attending and hoping to be recipients of this honored award. The audience from home will look forward to that too, along with the best and the worst dressers.

"[ChanMi's movie news] The 45th Daejong Film Festival"
by HanCinema is licensed under a Creative Commons Attribution-Share Alike 3.0 Unported License.
Based on a work from this source