[ChanMi's movie news] "Wish" movie based on a true story 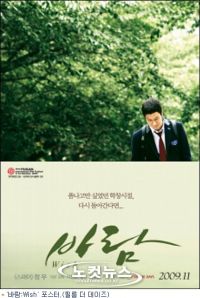 New film "Wish" will be revealing Jung Woo as the main character with his true stories of his teenage.

This film also has real characters who were real people in Jung Woo's life.

The actor had told director Lee Seong-han about his teenage in high school and the director decided to make it into a film and the work on the scenario was started right away.

This movie will be released this November and screened at the 14th Pusan International Film Festival.

"[ChanMi's movie news] "Wish" movie based on a true story"
by HanCinema is licensed under a Creative Commons Attribution-Share Alike 3.0 Unported License.
Based on a work from this source