[ChanMi's movie news] Won Bin is returning to the screens! 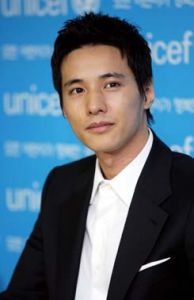 Our hot actor from "Taegukgi" is returning to the movie screens through a new movie, "Mother - 2009"!

Won Bin is coming back!

He has filmed a commercial film recently in Australia. And right after, he went to the set where the movie was being filmed without even rest.

This film will be the first after his military service. "Mother " is his comeback film costarring with Kim Hye-ja directed by Bong Joon-ho who also directed "The Host". This movie is a story by the mother, Kim Hye-ja about her innocent son, Won Bin who is being falsely accused of a murder.
The film will be finished in the beginning of next year.

"[ChanMi's movie news] Won Bin is returning to the screens!"
by HanCinema is licensed under a Creative Commons Attribution-Share Alike 3.0 Unported License.
Based on a work from this source