[ChanMi's star news] Kang Hye-jeong, one of the most busiest stars for this year! 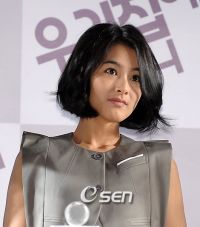 She is one of the stars who is very busy these days full of work!

She is dating as well as acting! She is becoming a new person for this 2009.

"Old Boy" has starred this actress as a strong actress and has been getting a lot of attention since 2006.

She has also been in "Love Phobia" with Cho Seung-woo, however, the movie hasn't been a hit.

After a few unsuccessful projects, she is returning with a new film, "Why Did You Come to My House - Movie" as well as a Hollywood film.

Let's await for her acting!

"[ChanMi's star news] Kang Hye-jeong, one of the most busiest stars for this year! "
by HanCinema is licensed under a Creative Commons Attribution-Share Alike 3.0 Unported License.
Based on a work from this source