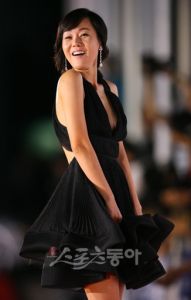 She had promised her fans that she would be back. On the 4th, she came back to Korea for the 7th Korean Movie Award Ceremony from Hawaii.

She will be attending this Ceremony, and then will leave for Hawaii on the 5th!

SHe was nominated for the movie "Seven Days" but because of her filming the "LOST" series in Hawaii it was thought that she would not make it to this event.

It is known that she has been discussing seriously to be able to miss a few days of filming to attend this Ceremony! Many staff for "LOST" were in a tight schedule and had disagreed upon her leaving Hawaii even for a few days.

However, Kim said that she couldn't break her promist to her Korean fans that she finally was able to get permission to come to Korea for one night and two days.
In November 20th, for the Blue Dragon Film Festival, she had also persuaded her "LOST" staff to let her visit Korea in spite of the tight filming schedules!

"[ChanMi's star news] Kim Yoon-Jin's short visit to Korea touches her fans"
by HanCinema is licensed under a Creative Commons Attribution-Share Alike 3.0 Unported License.
Based on a work from this source