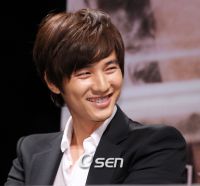 He is forever remembered as the original smile king.

Won Bin's smile can melt the heart of any young lady!

The film is about a mother who tries to save her son from prison accused falsely of murder!

"[ChanMi's star news] Won Bin at press meeting"
by HanCinema is licensed under a Creative Commons Attribution-Share Alike 3.0 Unported License.
Based on a work from this source