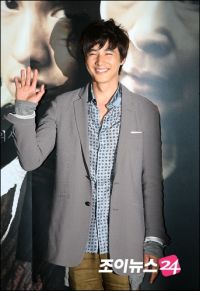 Won Bin is back!

Many fans are anticipating so much for this film and Won Bin's return on the screeens since his fisnishing the military service.

He costars with Kim Hye-ja who is the mother who fights to prove his son innocent from murder!

"[ChanMi's star news] Won Bin's smile melts our hearts"
by HanCinema is licensed under a Creative Commons Attribution-Share Alike 3.0 Unported License.
Based on a work from this source