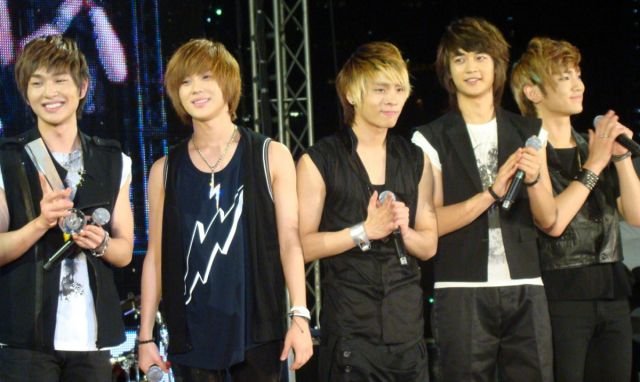 SM Entertainment's boy band SHINee made their comeback March of 2012 with the hit album entitled "Sherlock". The project topped iTunes and various music charts with its duo title track ("Clue" and "Note") release. The group's fans, which are endearingly called ShaWols, anticipated their return since October of 2010.

The week of March 11, 2012, SHINee released their artistic and sexy comeback images. The sexy "Sherlock" concept was shocking to many ShaWols who are use to the five young men's cute boy-next-door concepts. Chicago ShaWols had mix emotions when it came to SHINee's sexy hippie teaser photos and their British inspired music video.

What are some of the opinions ShaWols in Chicago have about "Sherlock"? I asked fans from the "Bring SM Town to Chicago" group what they felt about SHINee's comeback and here are some excerpts from their quotes.

"I was a bit scared for their comeback when the teaser photos came out. I think, along with the Shawols, we were a bit nervous about SHINee's comeback because it has been over a year since they have done anything in Korea. I'm happy about what they have done.
I'm already excited for the 3rd full album", states Lauren.

"I was very confused when I saw the teasers. I assumed they were going for a sexy comeback, since that was something they have never done before. When the music teaser came out, I felt that 'Sherlock' reminded me a lot of Michael Jackson (a blend between 'Jam', 'Smooth Criminal', 'Remember the Time', and 'Scream'). So, being a big fan of MJ, I'm very pleased with what I've seen and heard. The dance was very powerful and it is one of my favorite dances so far", Sara remarked.

Melinda shared the following, "I'm happy SHINee made a comeback. The choreography in their new music video is so cool, its like unfolding a fan. I've heard people say they look hippie-like and I kind of agree. It's not a bad thing they can rock any look".

Jasmine expressed, "The teaser photos shocked me because their were shirtless, but I couldn't help being excited for their comeback.When I saw the choreography and heard the song, they really improved since their debut. The comeback stages blew my mind! They came back stronger and the MR removed videos just showed how much they have improved vocally. I'm really happy to have my SHINee Oppas back".

Jay, who is not a ShaWol, commended the group on their amazing performance, I am not a ShaWol, but I thought that the song and dance were amazing. SHINee always delivers with their dances.They did not disappoint".

Andrea was uncomfortable with the teaser images, but she is a fan of their song, "I honestly thought the concept would be a detective like theme. I was very confused because everyone was half naked. The picture concepts were completely different from the actual music video itself. The music video is really great, but the mystery was a bit confusing. I find myself doing the Sherlock walk every time I hear 'I'm so curious, yeah!'"

Jenny compared "Sherlock" to Super Junior's 2011 "Mr. Simple" comeback with the teaser images that didn't help describe the actual song. Nonetheless, they are pleased with the outcome and think the group has the possibly of sweeping award shows, "The teaser photos kind of threw me off. I didn't like it. However, I love the song and the dance. I like Sherlock comeback more than their previous one.The only thing I was a little sad about was that Onew didn't get many lines in 'Sherlock'. It is amazing how much SHINee changed They have become one of the best K-pop groups out there. I'm sure they are going to win many awards with this comeback".

Cassandra thought the teaser pictures were colorful, but was still in a state of shock over the images. Despite their opinion of the images, they still think the band is living up to the Sherlock theme",I was shocked, no shocked doesnt even describe how I felt.However, they performed and released their music video and I thought that it wasn't as near as colorful as their teaser, but they still rocked the 'Sherlock' feel".

Dedicated ShaWol Nicole had this to say about the new project",I'm a huge SHINee Shawol and the months waiting for this was agony. When i finally heard the songs, I definitely saw the SHINee style. One of the things that I didnt like as much was the hippie look they had for the pictures and Taemin's long hair. He looked good with the long hair in' Lucifer', but this one isn't really working out for him. Nonetheless, he is my all time bias and favorite K-pop singer and dancer. I was really excited seeing the Sherlock music video.The dance looks like soo much fun so I'm learning the steps right now. I hope in the near future they have another concert tour SHINee world tour around the world and I'll do anything for them to come to Chicago! That would be an expeirence that I would NEVER forget".

SHINee debuted in May of 2008 with their hit single "Replay". They continued to promote their first album with promotions for "Love Like Oxygen" and "Amigo". "Julliete" was the follow-up in the summer of 2009 with the group solidifying themselves as male fashionistas with their bright pastel stage ensembles. SHINee released their third mini album "Ring Ding Dong" and wrapped up promotions for the project with "Jojo" in the latter half of 2009. In the summer 2010, they returned with "Lucifer" and sparked a controversial debate over the title of the album. They spent 2011 in Japan with their official debut promotions. SHINee released their first Japanese album titled "SHINee: The First" in December of 2011.

"Chicago Responds to SHINee's Sherlock"
by HanCinema is licensed under a Creative Commons Attribution-Share Alike 3.0 Unported License.
Based on a work from this source