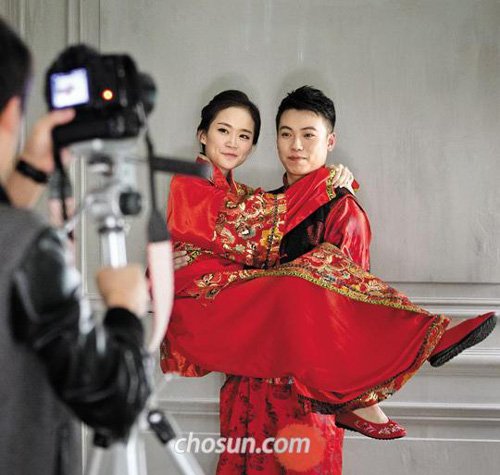 A Chinese couple pose for wedding photos at a studio in Samseong-dong, Seoul on Oct. 15.

Chinese newlyweds are rushing to Korea to have their wedding photos taken. Seven thousand Chinese couples visited Korea last year for that purpose alone, and the number is expected to surpass 10,000 this year.

In the past, couples from China's aspiring classes preferred the U.S., Europe or Japan for these mementos.

But since 2012, when rapper Psy's "Gangnam Style" swept the world, they have increasingly been coming here.

"The Korean Wave plays a big role, but most importantly, more and more Chinese consumers found out about the quality of Korean-style wedding photos", a wedding consultant here claims.

The surging numbers have spawned high-speed services. One photo studio in Gangnam that drew 600 Chinese couples last year offers a two-day photo shooting package. The couple head straight from the airport to the dress shop. The next day, they get their hair and makeup done at a beauty salon in the morning and have their photos taken at a studio in the afternoon.

An interpreter shadows them constantly.

The photos are touched up and are delivered to the couple in China two months later. The package costs between W3.5 million (US$1=W1,055) to W8 million, which is four times more expensive than having wedding photos taken in China.

One Chinese couple set to tie the knot next April visited Seoul recently. They chose the studio, dress shop and beauty salon before they came to Seoul. The studio was allegedly used when actress Han Ga-in got married in 2005, while the makeup was done at a beauty salon in Cheongdam-dong rumored to be frequented by actress Jeon Ji-hyun.

The couple paid W4.3 million for the service.

"It was worth the money" for those illustrious associations alone, the bride-to-be said.

Outdoor photos are also taken at Olympic Park in Jamsil, along the banks of the Han River, at the Namsan Hanok Village and other scenic locations.

Couples who prefer locations outside of Seoul are taken to a studio on Jeju Island or to locations in Gyeonggi Province and other nearby area where popular soaps like "My Love from the Star" were shot.

"Chinese Couples Fly to Korea for Wedding Photos"
by HanCinema is licensed under a Creative Commons Attribution-Share Alike 3.0 Unported License.
Based on a work from this source