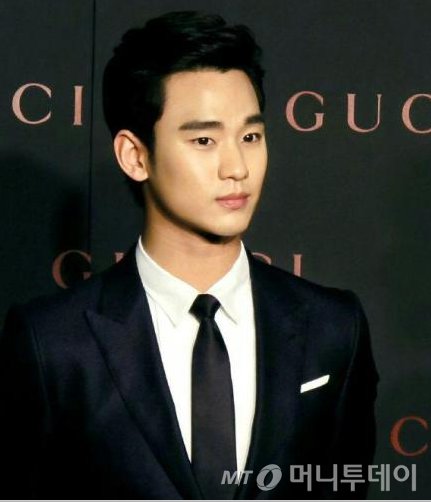 Hyundai Motors model Kim Soo-hyun appeared at the Beijing Motor Show for 90 seconds. About 10,000 fans gathered at the Hyundai Motors booth to see him and he greeted them with a bow and allowed them to take some pictures. Then he was gone.

A few days later he went through Vietnam to get to Hong Kong and attended the fan meeting in 5 star Hotel The Mira Hong Kong. Despite the grim drizzling weather, thousands and thousands of fans crowded at the hotel. Kim Soo-hyun only appeared for about 5 minutes.

A Chinese media reported that many companies are trying to market Kim Soo-hyun and his popularity to the 1.3 billion population of China and Korean companies are fighting to have him in their front line.

In fact, Kim Soo-hyun and Jun Ji-hyun became Chinese models for Samsung Electronics and models for the new ix25 by Hyundai Motors which is targeted towards the 20s and 30s. Other than that, he represents 16 other brands like Lotte Department Store, Tous Les Jours, The Face Shop, Prospecs, Coca Cola, Häagen-Dazs and more. This has earned him 18 billion won (~US$18 million) so far and this all happened in the last 2 months.

The Chinese media reported that Kim Soo-hyun's guarantee went up to at least 750 million won. His Häagen-Dazs fees went up to 1.65 billion won and that's more than the greatest earning Chinese star Fan Bingbing.

Kim Soo-hyun has been earning from other various events. On the 8th this month, Kim Soo-hyun attended the Beijing Gucci Charity Fashion Show with Angela Baby and earned 200 million won.

The Chinese media did show an altogether positive response however. It claimed that targeting the Chinese market to make Korean company ads is not stepping into China. It quoted a Korean media saying, "Chinese media report on Kim Soo-hyun's approach to China as if they're interested, but they're actually not. It can only be said he's made it into China if he chooses to film a Chinese movie or drama, but it doesn't seem like that's going to be happening soon".

"Chinese media, "Kim Soo-hyun made 18 billion won in 2 months""
by HanCinema is licensed under a Creative Commons Attribution-Share Alike 3.0 Unported License.
Based on a work from this source