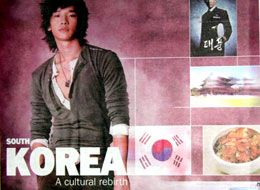 A new survey finds that South Koreans show a high level of satisfaction with Chinese films and food while Chinese are most interested in South Korean TV dramas.

The recent survey was conducted by the Korean Culture and Information Service under the Ministry of Culture, Sports and Tourism last November and December on 313 South Koreans and 616 Chinese.

More than 36 percent of the Chinese surveyed, meanwhile, selected Korean TV dramas as their favorite aspect of Korean culture.

Asked about the first thing that popped into their minds when thinking about China, around 27 percent of Korean respondents said Chinese products and 19-and-a-half percent said the Forbidden City. When the reverse was asked to the Chinese respondents about South Korea, around 28 percent said kimchi and 24 percent said Korean celebrities.