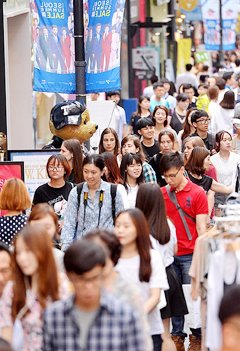 Chinese tourists are branching out into new areas in Korea as their tastes become more sophisticated and they increasingly break away from the herd.

The findings show that Konkuk University Station, which ranked a mere 47th last year, surged to 14th place this year. Gangnam Station and Itaewon rose by 19 and 10 notches to 12th and 18th in terms of search frequency.

Nam Yong-shik of Cheil PengTai said, "People who venture out to these areas are not usually part of group tours but come to Korea on their own".

These younger independent travelers are heading to Gangnam Station, where there are many restaurants and shops, to the Chinese restaurants of the Konkuk University area, and to the restaurants of Itaewon, which were made famous on cooking programs.

The Ministry of Culture, Sports and Tourism also analyzed visitor patterns and found that 58 percent of Chinese visitors last year did not come as part of large group tours.

Suh Young-choong at the Korea Tourism Organization said, "Armed with smartphone apps, young tourists in their 20s and 30s are getting a lot more out of their visits".

Incheon International Airport subway station, which ranked eighth last year in search frequency, rose to fifth place, which Cheil Worldwide said is due to more and more tourists going to the airport on their own rather than as part of group tours.

"Chinese Tourists Discover New Seoul Hotspots"
by HanCinema is licensed under a Creative Commons Attribution-Share Alike 3.0 Unported License.
Based on a work from this source