Cho Yeo-jeong's Unconventional Teaser Poster for "Cheat on Me, If You Can" 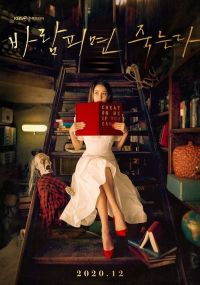 The third teaser poster of "Cheat On Me, If You Can" has come out.

The new KBS 2TV drama "Cheat On Me, If You Can" is a comic mystery thriller about a crime novelist wife who only thinks about how to kill people and a divorce lawyer husband who wrote a memorandum titled "Cheat On Me, If You Can" which tells an unconventional and intense story about adults who do bad things with guilt. Prior to its premiere on the 2nd of December, the third teaser poster of Kang Yeo-joo, played by Cho Yeo-jeong, has been released.

The poster is in the backdrop of an underground basement, with Kang Yeo-joo sitting on the steps looking familiar. Wearing a pure white dress, she's matched it up with bright red nails, red shoes and lips.

The creepy skeleton puppet that's holding onto her skirt gives a sense of fright. The book that she's holding, titled "Cheat On Me If You Can" also stands out.

The production team of "Cheat On Me, If You Can" said, "The first teaser poster, which began with a memorandum of signing away the body, the second teaser poster with the intense gaze of Yeo-joo, and the third teaser poster which creates a grotesque atmosphere of Yeo-joo sitting on the stairs of the basement. The teaser poster series was inspired by a part of the drama to maximize viewers' curiosity", they explained.

"Cheat On Me, If You Can" is directed by Kim Hyoung-seok and written by Lee Seong-min-II. The cast includes Kim Young-dae, Yeonwoo, Song Ok-sook, Jung Sang-hoon, Lee Si-eon, Kim Ye-won, Hong Soo-hyun, Oh Min-suk and more. It is one of the most anticipated dramas of 2020 and it premieres on the 2nd of December.

"Cho Yeo-jeong's Unconventional Teaser Poster for "Cheat on Me, If You Can""
by HanCinema is licensed under a Creative Commons Attribution-Share Alike 3.0 Unported License.
Based on a work from this source