Choi Ji-woo Chosen as Most Wanted Hallyu Star for Conversation 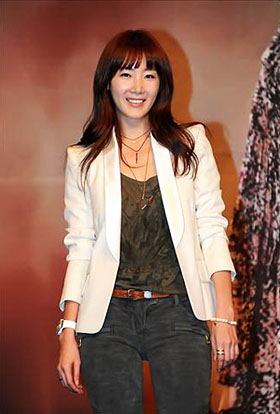 In addition, asked about the purpose of their visit to Korea, 12.5 percent (50 people) of the respondents answered "Hallyu entertainment", including concerts and events with Hallyu stars, which means that Hallyu has become one of the important types of entertainment to tourists. Hotel.com is a hotel booking site that maintains a list of 140,000 hotels all over the world and has more than two million users' reviews. Seoul had been selected as the second most popular tourist destination among Japanese travelers in a survey by Hotel.Com.

In addition, Choi Ji-woo has been chosen as the most popular Hallyu star in terms of popularity and acknowledgement in a recent survey conducted by the magazine "Nikei Entertainment", which is published by Japanese Economy Newspaper. Choi had signed a contract with a huge Japanese travel agency, HIS, and appeared in two TV commercials with the titles of "Welcome to Korea" and "Let's Go To Europe".

"Choi Ji-woo Chosen as Most Wanted Hallyu Star for Conversation"
by HanCinema is licensed under a Creative Commons Attribution-Share Alike 3.0 Unported License.
Based on a work from this source