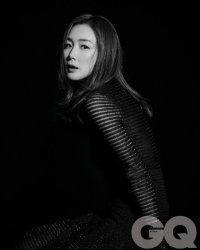 Actress Choi Ji-woo's visit to Japan has drawn great attention from the media there, amid rumors that she has fallen in love. Japanese sports dailies and broadcasters on Thursday gave intensive coverage of the Korean actress--who arrived at Haneda Airport in Tokyo on Wednesday for a three-day visit until Saturday--and her relationship with actor Lee Jin-wook.

Choi was welcomed by some 150 fans waiting at the airport, despite a snowstorm, who gave her a bouquet of flowers. "I am very happy to visit Japan again. I have wanted to meet you again", she told them. But when reporters, noticing a ring on her right hand, asked her if she plans to marry, she just smiled and hurried to leave the airport.

The actress went to Japan to promote her latest SBS drama "Celebrity's Sweetheart", which is scheduled to be aired on the satellite channel Wow Wow TV from May 1.

Attending a premiere for the TV drama at Tokyo's Yebisu Garden Hall on Thursday afternoon, Choi was bombarded with questions about her relationship with Lee. "We have good feelings toward each other, but that is all for now", she answered. "I can tell you one thing for sure -- that I have never yet thought about getting married".