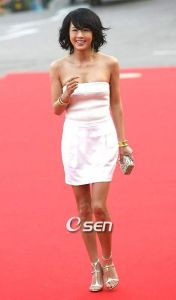 The nation was thrown into an unprecedented shock yesterday upon the news of the death of Choi Jin-sil, Korea's iconic actress and people's sweetheart.

Choi, who took her own life at the age of 40, was one of the most loved actresses to date, having starred in numerous hit TV series and movies. She was praised for her never-aging looks and flawless acting skills.

But her hard-won glitz and fame was also overshadowed by scandals, such as an ugly divorce in 2004. Her tragic death came after being involved in a rumor surrounding the death of actor Ahn Jae-hwan, who also committed suicide last month.

Raised by a single mother in a down-and-out household, Choi first entered the entertainment business in late 1980s through her younger brother Choi Jin-yeong, 39, who was a model at the time. Upon her first role in a periodic MBC TV drama series in 1988, Choi was quickly noticed and rapidly rose to stardom.

One of her biggest hits was a television commercial for Samsung Electronics Co. where she used a catchy phrase that said she had her (virtual) husband in the palm of her hands.

Choi's biggest break came in 1992, when she acted as a spunky travel agent in "Jealousy" aired by MBC. The mega-hit series was considered a harbinger of the country's now globally popular "trendy" dramas.

She was awarded best MBC award in 1997 and best female talent award by Korea Broadcasting Prizes in 1998.

Choi was also well-known among the fans for her successful rags-to-riches story, which she said enabled her family to stay close and tight.

Choi's first run-in with public tragedy was the death of her former manager Bae Byoung-soo in 1994. Bae, who put Choi on the star map, was killed by Choi's driver at the time. The actress was summoned for a court hearing as a witness.

At the height of her career in 2000, Choi married professional baseball player Cho Sung-min, drawing massive media attention. They called it the wedding of the century.

The marriage, however, was rocky and they split in 2002. The couple, who had a son and a daughter together, remained separated until August 2004, when Cho was arrested for domestic violence. The two were officially divorced a month later and Cho gave up his rights to his children in exchange for being removed from his obligation to pay off debts to Choi and her family.

Upon the divorce, Choi was forced to stay out of the limelight. A construction company that hired her as a spokesperson filed for damages worth 3 billion won, citing "damages to the company image for failing to manage her personal life properly".

Rising out of the pain, Choi returned to the small screen in 2005, taking a role of a divorced woman working her way to earn her living despite being diagnosed with cancer in "What Husband and Wife Live By". She won PaekSang Arts best actress award for the role that jerked the tears of viewers nationwide.

Her recent works included "Bad Woman, Good Woman" in 2007 and "Last Scandal" this year. "Last Scandal" about a middle-aged super star falling back in love with his first love was a huge hit, prompting the so-called "jumderella" syndrome, a combination of Cinderella and "ajumma", a reference to middle-aged Korean women.

Recently, Choi was preparing for the second season of "Last Scandal". She was also hosting a talk show in her name for a cable channel.

Choi made headlines earlier this year for succeeding in her plea to change the surnames of her two children to her's. Choi's son is seven and daughter is five.

She was most recently involved in rumors surrounding the death of Ahn Jae-hwan, who committed suicide last month after allegedly suffering from heavy debt. Ahn was also a husband of Choi's close friend comedian Jung Sun-hee.

Choi was found by her mother early yesterday morning in her home in southern Seoul, an apparent suicide by hanging.