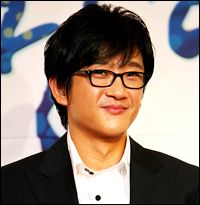 Choi Jin-young, the brother of the late actress Choi Jin-sil, was found dead of an apparent suicide, Monday. He was 39.

Choi was discovered hanging by police at his home in southern Seoul. He was rushed to the Gangnam Severance Hospital, but pronounced dead.

According to the hospital, Choi had red marks on his neck, but an autopsy would be needed to find a definitive cause of death.

Yonhap News Agency reported that the singer-actor had a dinner appointment for tonight according to a friend, who was at a loss to explain his death.

His death comes as a shock especially as his late sister, a popular actress, hung herself in a suicide Oct. 2, 2008.

Last month, he had said that he will go back to acting.

Choi started his acting career in 1993 in the popular drama "Our Heaven". His resemblance to his popular sister gave him a head start in his career, while his young image helped him gain recognition in various dramas, commercials and even films.

Choi's acting career floundered but in 1999, he returned to the stage as a singer using the name SKY. His first album "Final Fantasy" was a success with the popular number "Forever" topping music charts. He released his third and last album in 2004.

In 2007, he returned to acting with a supporting role in the drama "It's Okay to Love", but failed to catch much attention.

Photos of him in tears clutching his sister's picture shook the nation, and fans wept with him as he led her funeral procession. Acting upon his late sister's wishes, he belatedly enrolled in Hanyang University to study acting last year.

It was known that Choi had been suffering from depression and even tried to kill himself on his sister's birthday last year. He was sent to the hospital immediately and recovered after his previous attempt.

"Choi Jin-young Dead in Apparent Suicide Monday"
by HanCinema is licensed under a Creative Commons Attribution-Share Alike 3.0 Unported License.
Based on a work from this source