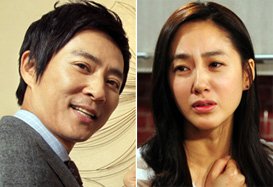 Actor Choi Soo-jong fell off a horse and ruptured his right shoulder ligament while shooting a KBS historical drama in Gyeongju, North Gyeongsang Province on Wednesday.

Choi's agency announced the news the following day, saying he "is still shooting the drama while receiving injections to kill the pain. But the battle scenes may have to be delayed as his shoulder is swollen to the extent that he can hardly even raise a sword".

On Sept. 26, the actor was involved in a car accident on the way to a production set for the same drama. His van was partially wrecked and he injured his neck and back.

Female lead Park Joo-mi also had a car accident on the way to the drama set on Tuesday night. She was taken to the intensive care unit after complaining of pain in her neck and abdomen. As of late Thursday, she was awaiting the results of medical tests after being moved to the general ward.