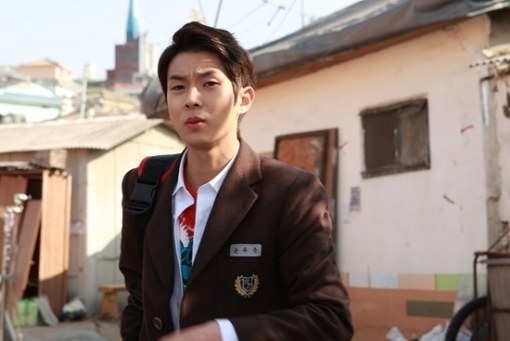 Another handsome actor has joined the line along with Kim Soo-hyun, Park Ki-woong and Lee Hyun-woo from the movie "Secretly and Greatly".

Choi Wooshik starred in the movie as the younger brother of Yoo-ran (Park Eun-bin), whom Dong-goo (Kim Soo-hyun), an actual spy who is undercover as the neighborhood dummy, likes.

He isn't hesitant about hitting Dong-goo in the head anytime he would look at his sister and protects his sister when she's being bothered by her superiors at work. Dong-goo acknowledged him as a man.

Netizens say, "I want to change him with my brother", "Kim Soo-hyun says he's a man, then he's a man", "I like his cuteness and the thought of protecting his sister" and more.

"Choi Wooshik is the true 'ladies' man'"
by HanCinema is licensed under a Creative Commons Attribution-Share Alike 3.0 Unported License.
Based on a work from this source