Chun Woo-hee in "Tazza: The Hidden Card" for 1 second? 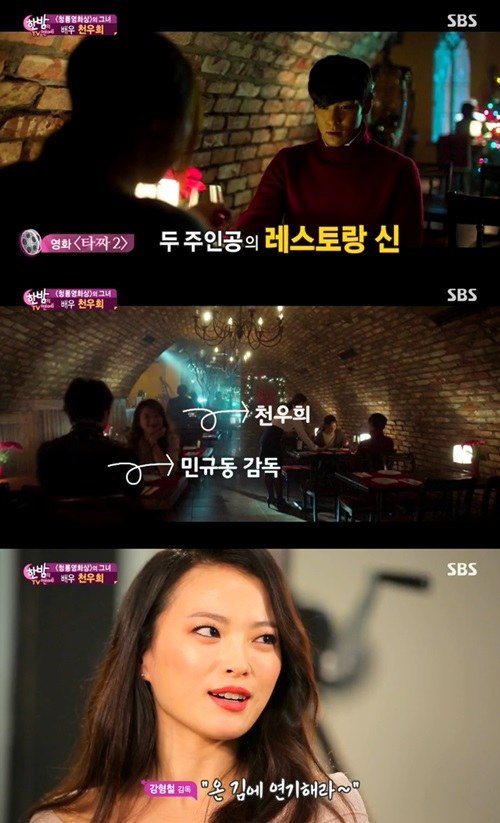 Chun Woo-hee recalled the movies she starred in until now and said she appeared in "Tazza: The Hidden Card" for a while.

A footage of her appearance was released in "TV News At Night". She was in the scene where the main characters were on a date in a restaurant. She was sitting on the table right next to them with producer Min Gyoo-dong. She's only there for a second but brought joy to movie fans.

Chun Woo-hee said, "I was there just to say hi and director Kang Hyeong-cheol said, "Do some work while you're here" and just put me there with Min Gyoo-dong". She met Kang Hyeong-cheol in "Sunny - 2010" and is in the same agency as Shin Se-kyung.

Meanwhile, Chun Woo-hee is the winner of the Blue Dragon Awards for "Han Gong-ju" but she hasn't always been noticed for her talent. She started off small and became known as the 'glue girl' in "Sunny - 2010". Then she continued on to "Thread of Lies" and "Han Gong-ju".

Chun Woo-hee said, "I want to be a good actress. I want to be one who can do whatever role that is given to her and I want a wide spectrum".

"Chun Woo-hee in "Tazza: The Hidden Card" for 1 second?"
by HanCinema is licensed under a Creative Commons Attribution-Share Alike 3.0 Unported License.
Based on a work from this source