Chungmuro actresses: 30's peak, but a lack of those in their 20's 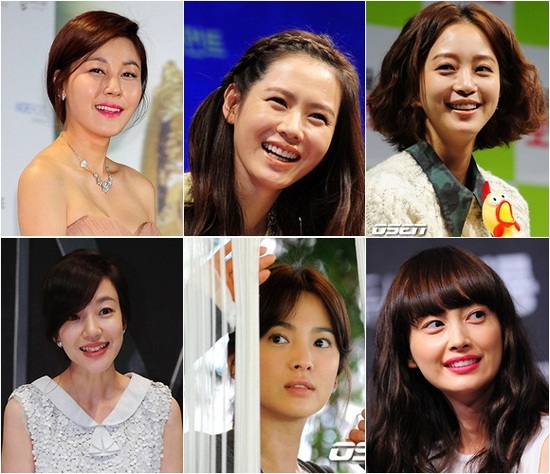 It looks like actresses in their 30s are about to take over the theaters.

One thing that's obvious in romantic comedies nowadays is that the actress is older than the actor. With it, we can see that their prevalence is becoming more noticeable.

Movies with actresses in their 30s that are soon to be released include:"You Pet", "Many A Little Romance", "Spellbound" and more.

Kim Ha-neul from "You Pet" was born in 1978 and acted with Jang Keun-suk who was born in 1987. Based on a Japanese original by Ogawa Yaoi, this movie is about how Ji-eun (Kim Ha-neul), who has outstanding looks and social talents but is terrible in social relationships, and In-ho (Jang Keun-suk), who has always been popular amongst women since he was young, become owner and pet, building friendship and understanding.

Kim Ha-nuel rose to fame through her many dramas and this year she was awarded Best Actress (at Korea's Grand Bell Film Awards) with her movie "Blind". This is the first time she has received this since her debut and it's a great honor for an actress of 15 years of experience.

"Many A Little Romance" was starred by Han Ye-seul, born in 1981 and Song Joong-ki, born in 1985. In the movie, Han Ye-seul shows her comical instincts as a cheapskate. Having debuted in theaters through the 2007 movie "Miss Gold Digger", she once again displayed her bubbliness.

In the center of attention is Son Ye-jin, born 1982, starring in "Spellbound" with Lee Min-ki, born 1985. She is Yeo-ri, a woman who sees ghosts after an accident. She has acted in various productions and every time has shown the ability to transform herself.

Other than those, Lim Soo-jung is coming back with Min Gyoo-dong's "About My Wife", Ha Ji-won with "As One", Song Hye-kro with "Today" and Lee Na-young with "Howling" in which she acted with Song Kang-ho. They are all actresses in their 30s.

Jung Yoo-mi from "Silenced" is also looking forward to becoming 30 as she was born in 1983. She is slowly becoming the general trend of Chungmuro with her skilled acting in "My Dear Desperado", "Oki's Movie", "A Million" and more.

The prime days of the women in their 30s comes from experience and building up on acting and stardom since their 20s. Also, the many movies that rest on their efforts are also lending a hand.

"Chungmuro actresses: 30's peak, but a lack of those in their 20's"
by HanCinema is licensed under a Creative Commons Attribution-Share Alike 3.0 Unported License.
Based on a work from this source