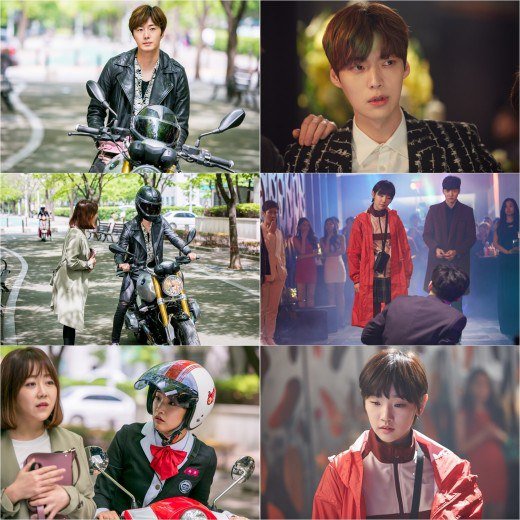 "Cinderella and the Four Knights" is a romantic drama about three chaebol brothers (Kang Ji-woon, Hyeon Min, Seo Woo) who are out of control and a girl (Eun Ha-won) who accepts the mission to make them people-like.

The stills show Kang Ji-woon (Jung Il-woo) wearing a leather jacket and holding a pink women's bag. Another girl is holding the same bag with a look of awe in her face. Eun Ha-won (Park So-dam) is looking at her with a curious expression.

Kang Hyeon-min (Ahn Jae-hyun) and Eun Ha-won meet under extreme circumstances as well. Eun Ha-won is wearing a sweat suit inside a red raincoat and is warming a guy who is sprawled on the ground. Kang Hyeong-min is watching this with amusement.

As soon as Hyeon-min was surprised to see Eun Ha-won in an attire that's not fit for a club, Eun Ha-won didn't mind the rude service towards her and instead taught the waiter a lesson.

According to the production, Kang Ji-woon and Kang Hyeon-min are cousins and rival heirs to Haneul Group. They are also about to form a rival relationship between themselves and Park So-dam.

The poster of the three of them is highly anticpated as well. The newest tvN drama "Cinderella and the Four Knights" starring Jung Il-woo, Ahn Jae-hyun, Park So-dam, Lee Jung-shin, Choi Min and Son Na-eun, will start on the 12th of August.

""Cinderella and the Four Knights" Jung Il-woo VS Ahn Jae-hyun's first encounter with Park So-dam"
by HanCinema is licensed under a Creative Commons Attribution-Share Alike 3.0 Unported License.
Based on a work from this source