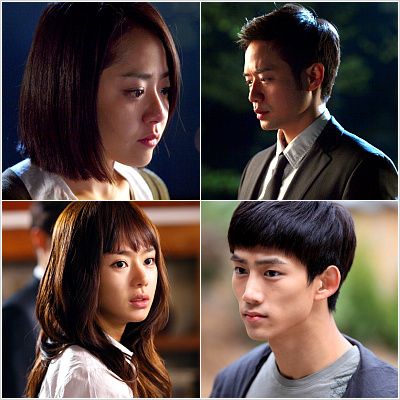 KBS TV series "Sister of Cinderella" continued its reign atop Wednesday and Thursday nights, beating out its competitors in the same time slot.

According to figures released by TNmS (Total National Multimedia Statistics) on Friday, "Cinderella", two episodes away from finishing its run, recorded viewership ratings of 23.2 percent on Wednesday and 21 percent the following day, posting an increase by an average of 4.1 percent from the previous week.

The show recorded slightly lower ratings on AGB Nielsen Media Research but has shown a growth by a mean of four percent from last week. The drama brought in TV ratings of 20.2 percent on May 26 and 19.4 percent the next day.

This week's episode focused on Ki-hoon (Chun Jung-myung) trying to figure out the real intentions of Eun-jo (Moon Geun-young) and the two go on a search for Kang-sook (Lee Mi-sook) who is staying in Pohang.

New SBS drama "Bad Man", which premiered this week, scored passing ratings -- in the 10 to 12 percent range on both charts.

"Bad Man", starring Kim Nam-gil and Han Ga-in, is about a man and a woman who dream of climbing the social ladder by wooding the children of a conglomerate family but end up falling in love with each other.

""Cinderella's Sister" continues reign atop Wed-Thurs nights"
by HanCinema is licensed under a Creative Commons Attribution-Share Alike 3.0 Unported License.
Based on a work from this source