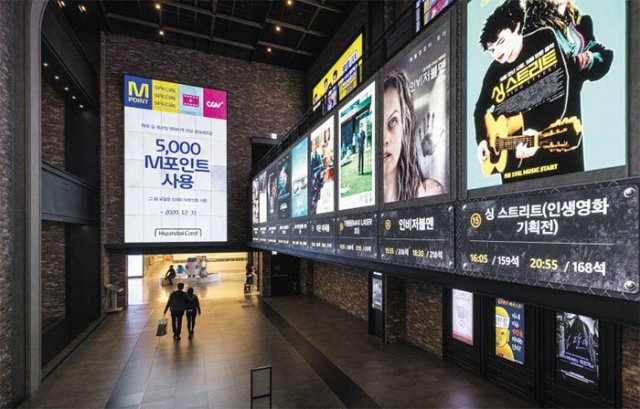 A movie theater in Seoul is deserted on Monday.

The coronavirus epidemic is taking a toll on movie theaters as people avoid crowded places amid the spread of the virus.

According to the Korean Film Council, the number of moviegoers plunged recently with just 36,447 visitors on Monday, for example -- the lowest since March 2004 when the daily number of visitors fell below 30,000.

There are some 556 theaters with over 3,000 screens throughout the country, which means that the average number of visitors stood at only 65 per theater.

As recently as early January, theaters drew about 1.34 million visitors a day and were expected to flourish further in February, buoyed by director Bong Joon-ho's Oscar wins with his film "Parasite". However, their visitor numbers fell drastically as Korea reported a rapid surge in the number of coronavirus infections in late February and the WHO declared COVID-19 a pandemic last week.

If this trend continues, theaters may find it difficult to keep their businesses going.

But there is another factor in the decline. More and more people don't want to bother with the hassle of all that waiting in line or pre-ticketing, and are simply turning to Netflix or other streaming services.

Meanwhile, the release dates of much-awaited Hollywood blockbusters like the latest James Bond film "No Time to Die" and Disney's remake of the 1998 animated adventure film "Mulan" have been pushed back several months due to global concerns over the virus.

"Cinema Attendance Plunges Amid Coronavirus Epidemic"
by HanCinema is licensed under a Creative Commons Attribution-Share Alike 3.0 Unported License.
Based on a work from this source