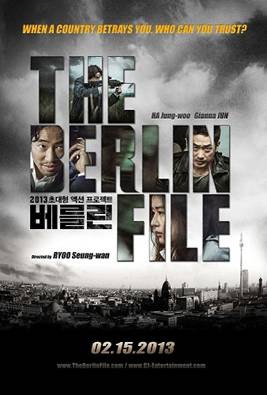 Screen International: "Arguably one of the most high profile South Korean releases of early 2013, Ryoo Seung-wan's "The Berlin File" continues to adopt Ryoo's visual trademark through pulsating and spectacular set-pieces".

Until now, Korean directors have been underrepresented in the Asian action genre dominated by Hong Kong masters (John Woo, Andrew Lau) and their most passionate American aficionado Quentin Tarantino. With "The Berlin File" - Korea's biggest release of 2013 - American audiences have the chance discover the visual pyrotechnics of Korea's only action auteur, Ryoo Seung-wan.

This stunning spy thriller brings political intrigue back to the streets of Berlin, where North-South Korean tensions flare up with an intensity not seen since the Cold War. Korea's most charismatic actors Ha Jung-woo, Ryoo Seung-bum and Han Suk-kyu are pitted against each other in the twisty tale of spy craft and personal redemption.

A tense illegal arms deal in a Berlin hotel suddenly descends into mayhem after a ghost agent named Jong-seong (Ha Jung-woo) appears on the scene. Secretly watching the deal go down is embattled South Korean intelligence chief Jin-soo (Han Suk-kyu), the North Koreans and the US CIA, who are all left trying to decode whether the ghost is a double-agent or taking the fall for a more insidious plot. Myung-soo (Ryoo Seung-bum) a young, notorious North Korean agent jumps into these treacherous waters to investigate loyalties of all involved and begins to implicate Jong-seong's wife, Jung-hee (Jun Ji-hyun), a translator at the North Korean embassy in the German capital. Caught between his love of country and his wife, Jong-Seong must quickly prepare to make the ultimate sacrifice.

Set in the present day, "The Berlin File" features a truly star-studded cast bringing together Ha Jung-woo, successfully transformed from riveting character actor into Korea's newest action hero; Ryoo Seung-bum, who displays a dizzying range from psychos to romantic comedy leads, and the glorious return of Han Suk-kyu, nearly 14 years after playing the iconic role as a South Korean officer who falls in love with a North Korean agent. Also featured is Jun Ji-hyun, who changes gears from recent glamorous turns to become the emotional anchor of this all too potentially real story.

Director Ryoo Seung-wan: "During the Cold War, six out of ten people walking the streets of Berlin were spies. Although that crushing period has passed, I sense that tragic history still hanging in the air. I wanted to tell a story about human beings who are defined by dangerous secrets bigger than their own lives".

Established in 1995, CJ Entertainment is Korea's top motion picture studio and boasts the country's largest and most significant domestic film library, with 20-24 new films being added each year. Its North-American operation, CJ Entertainment America handles nationwide US distribution of these new films, making it the largest Asian theatrical film distributor in the country. Many of its titles are available for purchase on DVD, as well as on digital platforms, such as Netflix, Hulu, and the Sony Entertainment Network.