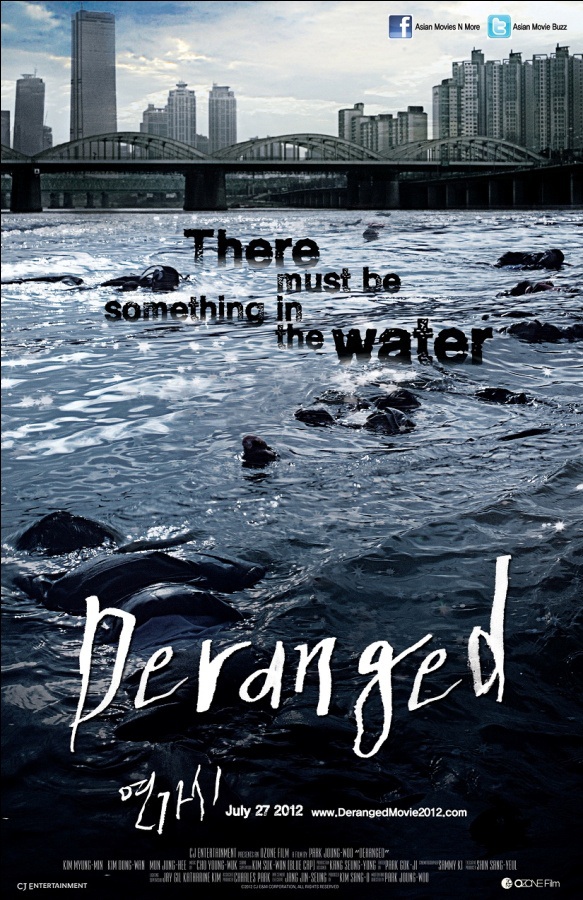 There must be something in the water.

Just before dawn, skeletal bodies surface on the Han River in Seoul, Korea. More bodies are discovered all over the nation. The cause of death is determined to be a mutated parasite worm that brainwashes its hosts, ultimately making them jump into bodies of water and to their death within days of infection. As the number of victims rapidly increase, the government sets up an Emergency Response Task Force and puts all infected citizens into quarantine. Meanwhile, pharmaceutical company salesman Jae-hyeok realizes that his family is infected, and becomes desperate to find the cure. In his frantic search to save his family, he uncovers a frightening conspiracy behind the epidemic.

An accomplished screenwriter himself, Park Jeong-woo has established himself with acclaimed films such as "Attack the Gas Station!", "Kick the Moon", "Last Present", and "Jail Breakers - No. 815". Seeing the story of "Deranged" as a metaphorical mirror into our own society, PARK portrays the catastrophe with horrifying realism, promising the audience a disaster film unlike any other.

"Deranged" is scheduled to release in select cities across North America, including Los Angeles, Seattle, Dallas, Chicago, New York, and Toronto (Full list of theaters below).

Stage 2: No increase in weight despite heavy consumption of food

There must be something in the water.

One day, out of the blue, I thought about making a film about a parasite. With that, I began writing the first scene to a disaster film where parasitic worms cause a national emergency. But as the story unraveled, I realized how close the scenario was to reality.

We live in a society where a metaphorical parasite feeds off our greed. We humans do not know that such greed can lead to our demise, and continue to abandon our ethics and conscience. Slowly, everyone becomes infected until the world enters into chaos. Once I realized this, I found that I had already arrived at the ending of my story.

Just before dawn, gruesomely skeletal bodies surface on the Han River. More bodies are discovered all over the nation. The cause of death is determined to be a mutated parasite worm that brainwashes its hosts, ultimately making them jump into bodies of water and to their death. Further research indicates that the worms have only a short incubation period and carry a 100% fatality rate, causing mass general panic.

As the number of victims rapidly increase, the government sets up an Emergency Response Task Force and puts all infected citizens into quarantine. But gone insane under the influence of the parasite, the infected people penetrate the quarantine area and jump into the water to their death. Meanwhile, pharmaceutical company salesman Jae-hyeok realizes that his family is infected, and becomes desperate to find the cure. In doing so, he uncovers a frightening conspiracy behind the infection.

A Hairworm (also commonly called horsehair worm and gordian worm) is a thin and lean parasitic worm that lives inside insects. The parasite produces proteins that act directly on the development of the central nervous system and are similar to proteins present in other insects. When the worm is ready to reproduce, it is able to influence its host's behavior by secreting proteins that induce its host to jump into water, where it will drown. The parasite then leaves its host, continuing to live and reproduce in water.

The parasite received nationwide attention in Korea when its unique and terrifying behaviors were shown in a 2009 documentary. Some of the viewers called the hairworm an 'alien' and were haunted by the possibility of human infection.

The making of a horrifying outbreak

Creating a believable look, feel and behavior key to an infected character was probably the most difficult task during the making of this film. I wanted the process of infection to be grounded in reality, but there were no scientific materials to refer to for human subjects. The role of Gyeong-sun shows the most detailed and vivid symptoms of infection. The actress MUN Jung-hee worked tirelessly with a special acting coach to come up with a signature behavior exhibited by someone infected by the parasite worm. She screamed, flipped her eyes, crawled, ran, and experimented with dozens of facial expressions until we were able to decide on something unique to our project. We used her sessions as the basis of behavior for all the infected characters.

Even though an actual hairworm is different in size and texture, it was harder than initially thought to portray them realistically. We needed another type of horror that could differentiate our film from other disaster films with vicious monsters or powerful natural disasters. We wanted the audience to grimace and say 'Yuck! These things could live inside me?'. We focused on adding realistic details to the worm's cringe-worthy appearance and movements.

We imagined that the hairworm would absorb all nutrients from its host, so we put heavy emphasis on creating wrinkly skin for the infected. We first got molds of the actors' face, hands and feet with silicone and then made plaster molds. We sculpted a more gauntly face on the plaster, then silicone limbs were created with the plaster molds for fake skin. Blood vessels, added hair, and eyelashes were then applied. Finally, a body was made and we attached prefab limbs to it.

The shoot itself using the dummies proved to be a major challenge. Since the infected humans drown in a body of water, we had to float our dummies in the Han River as well as various streams and rivers around the country. The dummies would soak up the water and became extremely heavy. And once pulled out of water, they froze within 5 minutes and would stick together. Our team had to enter the water countless times to manage the dummies, making us feel like we were the ones infected by mutant parasite worms.

"I will never give up on you".

He'll stop at nothing to save his family / Jae-hyeok

Once a promising professor, Jae-hyuk's greed resulted in losing his fortune to the stock market, forcing him to become a salesman for a third-rate pharmaceutical company.

While he once neglected his family for money, Jae-hyuk must now face a horrible truth: His family has become infected by the parasite. Jae-hyuk dives into the deep end and will stop at nothing to save them.

In South Korea, Kim Myung-min's is an actor where even hearing his name breathes trust in a film. In "Deranged", KIM proves his ability as an actor as he transforms from an irresponsible working man into a dedicated father and husband who risks his life for his family.

Gyeong-sun is a kind and gentle mother and wife.. By taking her children on a trip to the nearby stream when her deadbeat husband fails to take them, she becomes infected along with her kids. She is quarantined and slowly loses her sanity, but still manages to maintain hope even in the face of devastation.

Moon is an actress who puts on a convincing performance in any role. She has appeared in dozens of TV dramas over the years, but her heartbreaking performance as a mother who does not give up hope even on her death bed is bound to bring tears to audience's eyes.

"For your family, I will go all the way".

As if bringing Jae-hyeok into the stock market wasn't enough, Jae-pil always seems to be chasing insider information rather than crime scenes. But he is alarmed when bodies begin to surface in countless streams and rivers across the country, finding that his very own brother's family has also been infected. Jae-pil ferociously investigates the case to uncover a dark conspiracy behind the nationwide epidemic.

KIM made a spectacular transformation from a pop idol star to an actor. He received much acclaim through his performance as poet and freedom fighter Lee Yook-sa in "The Peak" (2011). In "Deranged", KIM sheds his delightful and playful image to play a veteran crime scene detective.

"How did a hairworm end up in a human body?"

Yun-joo is Jae-hyeok's former classmate and also Jae-pil's fiancee. Upon hearing the news of the outbreak, she joins the emergency task force and positions herself in the center of the parasitic outbreak.

Beautiful and intelligent, former Miss Korea Lee Honey is an actress determined not to sacrifice her quality traits in the rise to stardom. She has been paving a path for other upcoming actresses by playing strong, confident, and equally charming female roles. This time, LEE convincingly dons the role of Yun-joo to become a serious researcher determined to find a cure for the outbreak.

"The production process for "Deranged" seemed like disaster film in itself".

Director Park Jeong-woo originally established himself as a successful screenwriter, penning acclaimed films such as "Attack the Gas Station!", "Kick the Moon", "Last Present", and "Jail Breakers - No. 815". With "Deranged", Park portrays a catastrophe with horrifying realism, promising the audience a disaster film unlike any other.

Q. The idea of a disaster film based around a mutant parasite is very interesting. How did you come up with it?

A. Three or four years ago, I came across information about a parasite called a hairworm by chance. I researched it online and was shocked to see a parasite that controlled its host by taking over the brain and making it drown itself, only to emerge out of the host again from the water.. I thought of what it would be like if such a parasite could infect humans rather than small insects.

Q. What was the most important aspect when unfolding the story about a progressive infection?

A. The most important aspect of this film was to make it believable.. "Deranged" already had a plausible premise, but the situations in the film had to be persuasive enough to lead to an equally credible ending. In order for all of this to happen, we needed to provide the audience with critical information which would ultimately become the backbone of this story. If background information was too deep, the story would become too complicated and we would risk pacing. On the other hand, if not enough information was given, we would lose credibility. It was important to balance the flow of information so that it would not interfere with the film's overall flow.

Q. What is the most important feature of this film?

A. This film unravels very quickly. It was like a sprint to package all of the story elements and crucial information within the time frame that we had. If you want to be entertained, I promise you won't be bored as long as you can keep up with the story. But if you're expecting to get a little more, I ask you to truly concentrate on what's happening in the story. If you can relate the film to what's going on around the world right now, you'll find another meaning to this parasite… and you'll see yourself among the infected.

"CJ ENTERTAINMENT Brings Sci-fi Thriller DERANGED to North America"
by HanCinema is licensed under a Creative Commons Attribution-Share Alike 3.0 Unported License.
Based on a work from this source