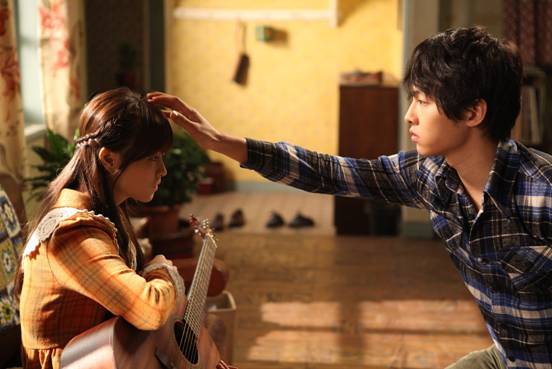 Coming to North America on November 30!

"It will fulfill and dazzle you to the very end" – Anderson Le, HIFF

South Korean box office champion "A Werewolf Boy" has truly captured the hearts of females young and old, surpassing 6 million in admissions within 26 days of release and becoming the film with the 3rd highest box office in 2012. With its captivating storyline and lead actor Song Joong-ki bringing audiences to the theater for second and third doses of the movie, the film's distributor, CJ Entertainment, announced that they would be releasing an exclusive alternate ending version of "A Werewolf Boy" in December 2012.

The existence of an alternate ending for "A Werewolf Boy" was first revealed at an audience Q&A session with the film's director, Jo Sung-hee, in Seoul. During one of his answers, JO said that "Actually, we did shoot an alternate ending for PARK Bo-young and Song Joong-ki", to which the actor Song Joong-ki added, "Park Bo-young put on such a beautiful performance in this unrevealed clip. If possible, I'd like for this version to be released as well". Following this, countless requests poured in on Twitter for the film's exclusive alternate ending.  CJ Entertainment has confirmed that the version will be released in theaters this December in South Korea, adding that the ending also reveals a hidden story behind "A Werewolf Boy"'s antagonist, Ji-tae, and the villagers. The popularity of "A Werewolf Boy" in South Korea continues to grow, as the film prepares for its release in North America on November 30.

Please see below for a confirmed list of theaters releasing "A Werewolf Boy" in North America. For more information, visit www.AWerewolfBoy.com

Rating
NR not rated by the MPAA (US Rating)

He was a creature that was never meant to exist.

Summoned by an unexpected phone call, an elderly woman visits the country cottage she lived in as a child. Memories of a boy she knew 60 years ago come flooding back to her. Then young Suni and her family moved to a small village in Korea. There, they encounter a bedraggled orphan boy hiding under a bush and take him in out of pity. Called a "wolf boy" by some for his feral behavior and uncommon strength, Suni teaches the boy how to eat at a table, and read and write so that he might one day live among people. He repays her kindness with a devotion unequalled by any human being, a love that exceeds all normal expectations. Then one day a threat to Suni exposes the boy's deadly bestial instincts, and in an instant he becomes the subject of the villagers' fears. In order to save the boy's life, Suni must abandon him while promising, "Wait for me. I'll come back for you".

"CJ Entertainment to release exclusive alternate ending for 'A Werewolf Boy'"
by HanCinema is licensed under a Creative Commons Attribution-Share Alike 3.0 Unported License.
Based on a work from this source