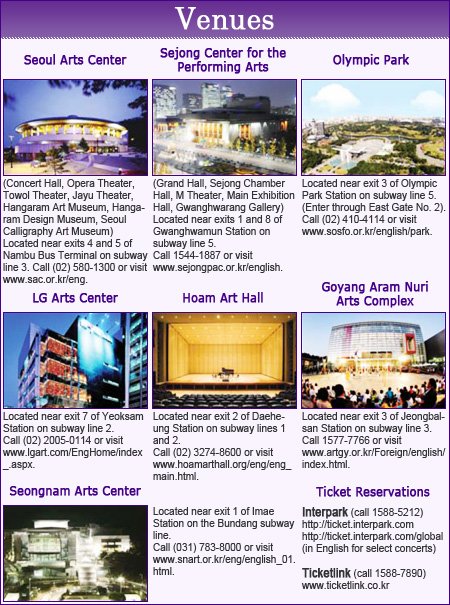 Japanese pianist Ryuichi Sakamoto, based in Tokyo and New York, will tour Japan and Korea with violinist Judy Kang and cellist Jaques Morelenbaum. Sakamoto's album "1996", which is to be performed, includes songs many are aware of, such as, "Merry Christmas Mr. Lawrence", "R ain" and "The Last Emperor". Tickets cost 50,000 to 160,000 won. For more information, call (02) 599-5743.

On The Mic
Hongdae V-Hall
Sept. 1

Hongdae V-Hall is gathering the most famous and respected hip hop artists in Korea. The core difference "On the Mic" from other hip hop concerts is collaboration between members of different hip hop groups. The artists include The Quiett, Beezino, Dok 2, Double K, Juvie Train and DJ R2. Tickets cost 39,000 won. For more information, call 1644-4575.

Show Me The Money Concert: The Gathering
AX- Korea
Sept. 21

"Lives of the Great Joseon Artists" is currently exhibiting the most recognized masterpieces of the Joseon Kingdom. The works displayed are well known and most local students would have learned about them in school. Admission is free. Located near exit 4, Samseong Station on subway line 2. For more information, call (02) 3457-1665.

The five-member band Ulala Session, rose to fame after taking the second place during "Superstar K3". The band is holding their first concert, "The Beginning". Tickets cost 77,000 to 99,000 won. For more information, call 1544-1555.

SM Entertainment, home to such stars as Girls' Generation, TVXQ, Super Junior, BoA, SHINee, f(x) and Kangta, will host a concert featuring these K-pop stars. Tickets will go on sale from July 12 on Gmarket at www.ticket.gmarket.co.kr). Tour packages for foreign fans will become available through www.easternrooms.com. Tickets cost from 16,500 won to 99,000 won. There are also family package tickets. For more information, call 1566-5702.

Verbal Jin, a Korean rapper and a record producer, will hold a concert in September. He first began his music career with SNP, a hip hop crew. His most recent albums are "Go Easy" and "Go Hard". Tickets cost 88,000 won. For more information, call 1544-1555.

The musical "Hero" is about Ahn Jung-geun, a Korean independence activist, who assassinated Ito Hirobumi, the first Prime Minister of Japan, when Korea was on the verge of annexation by Japan. Tickets cost 110,000 to 120,000 won. For more information, call (02) 2250-5925.

"Classical Concerts"
by HanCinema is licensed under a Creative Commons Attribution-Share Alike 3.0 Unported License.
Based on a work from this source