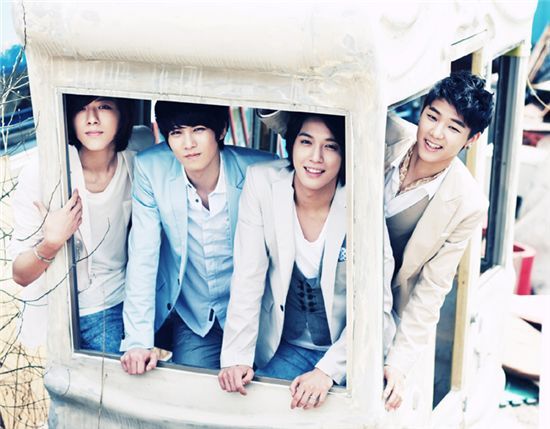 Rock band CNBLUE is scheduled to kick off a six-stop Asia tour next month, starting with a concert in Korea on July 31.

The group's agency FNC Music announced in a press release that the boys will then perform in Hong Kong and Singapore in August, Thailand, Taiwan and Japan in September and China in October.

FNC explained that the tickets for their Seoul concert titled "Listen to the CNBLUE" were sold-out within a minute of going on sale last month.

Four-member band CNBLUE released two singles in Japan before breaking into the local music scene with their mini-album titled "Bluetory" in January.

The group had garnered much attention ahead of their debut with leader and main vocalist Jung Yong-hwa gaining popularity through SBS' hit TV series "You're Beautiful" (2009).

They released their second mini-album album "Bluelove" in May 19 which fared well in Korea and has topped several weekly music charts in Taiwan as well.

The boys also unveiled a new Japanese single album "The Way" in June as well as performing in a sold-out live concert in Osaka the same month.