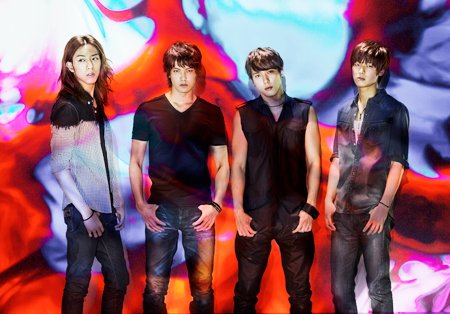 Korean rock band CNBLUE will undertake an arena tour of Japan in October. The four-member group is to give nine performances in six cities including Niigata, Osaka, Hiroshima and Saitama.

According to their agency FNC Entertainment on Wednesday, the tour is to start at Nippon Gaishi Hall in Nagoya on Oct. 2 and run through Oct. 21. Some 100,000 are expected to attend the concerts.

Since their debut in 2010 with EP "Bluetory", CNBLUE have become one of the few rock groups to flourish in the electro-pop dominated local music scene. They are well known for massive hits such as "I'm a Loner" and "Love", which was included in their second EP "Bluelove". The band comprises of front man Jung Yong-hwa, bassist Lee Jung-shin, guitarist Lee Jong-hyun and drummer Kang Min-hyuk. They have won numerous awards including Best Male Rookie at the 12th Mnet Asian Music Awards in 2010, Best Band Performance at 13th Mnet Asian Music Awards in 2011 and Disk Bonsang at the 26th Golden Disk Awards in 2012.

"CNBLUE to hold arena tour in Japan"
by HanCinema is licensed under a Creative Commons Attribution-Share Alike 3.0 Unported License.
Based on a work from this source