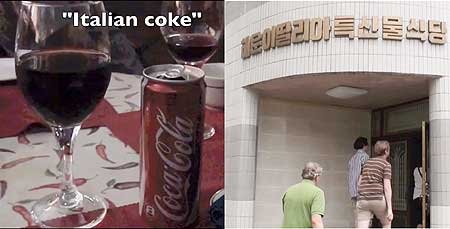 In the left image, a can of Coca-Cola is seen at an Italian restaurant in Pyongyang in this screen capture of a video uploaded to YouTube on Oct. 9, 2011. At right is the entrance to a pizzeria in the North Korean capital. Yonhap

Coca-Cola said Friday it had not agreed to sell its products in North Korea and that any such activity was unauthorized.

The comments came after local media reported a YouTube clip in which a pizzeria in Pyongyang is seen serving cans of the soft drink.

"Coca-Cola does not currently do business in North Korea and any product sold in the market has been purchased by unauthorized third parties and imported into the country from other markets where they were sold", an official of Coca-Cola Korea told The Korea Times.

In the short clip, uploaded in October last year, foreign tourists are seen dining in a restaurant believed to be a pizza parlor run by Corital, a North Korea-Italy joint firm. The video confirmed rumors that the symbolic American drink was being sold in Pyongyang.

One Seoul official said the drinks could have been purchased in China.

North Korea and Cuba are the only countries not to do business with the soft drink giant.

Speculation over the possible introduction of the drink was high given recent reports that the isolated state may be more open to Western culture under new leader Kim Jong-un.

Victor Cha, a North Korea watcher and Georgetown University professor, recently wrote in Foreign Policy that he sat in on an informal meeting in New York in the spring between North Korean officials and Coca-Cola representatives. Cha said the sides discussed opening a Coca-Cola branch in the North.

Kim, since taking over after Kim Jong-il's death in December, has emphasized the need for changes to improve people's lives and reportedly ordered cadres to explore how to buoy the economy.

He has shown a greater acceptance of U.S. symbols as well despite its harsh rhetoric against Washington. Kim was recently shown attending a concert featuring Disney characters - also unauthorized - and other icons of American culture. The regime has also prominently featured Kim's wife Ri Sol-ju accompanying him as first lady.

Last October, Forbes Magazine reported that the North was trying to bring in Coca-Cola in a bid to improve ties with Washington, detailing a meeting between an American investor and the head of a North Korean investment body in Pyongyang. It added Pyongyang appeared eager to introduce U.S.-based fast-food joint KFC to the country as well. This followed reports that executives of the two companies visited the impoverished state.

Analysts say the North has refurbished its party with technocrats and tightened Kim's grip on the military. Such moves, they say, could allow him to gradually attempt reform measures.

The introduction of such companies would fall in line with the North's drive to invite foreign investment. It has implemented an ambitious plan to expand its GDP to $1 trillion by 2020.