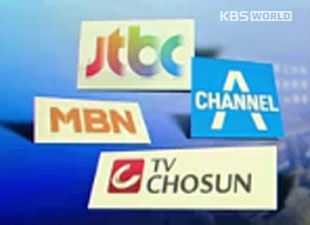 Four comprehensive programming TV channels and one news-only channel were launched in South Korea on Thursday.

The four channels will air programs around-the-clock. The amount of time required to create the 24 hour programming is expected to stand at around 17-thousand-520 hours annually.

The four operators of the new channels are hoping to produce massive added value in overall media-related industries by injecting more than one-and-a-half trillion won in capital. The move is expected to expand contents-related markets and create more jobs.

Attention is being drawn to whether the new channels will break down walls between various types of media, such as newspapers, broadcasting and online media.

"Comprehensive Programming TV Channels Go on the Air"
by HanCinema is licensed under a Creative Commons Attribution-Share Alike 3.0 Unported License.
Based on a work from this source