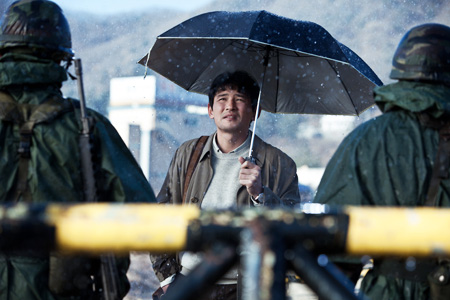 Hwang Jung-min stars as an investigative journalist in the conspiracy drama "Moby Dick". / Courtesy of Showbox/Mediaplex

Marked by intrigue and wit, "Moby Dick" paves the way for conspiracy dramas, a genre not yet fully explored in Korean cinema.

Painstakingly realistic depictions of thoroughly domestic matters provide for Hollywood-esque entertainment that invites vested interest, particularly as top actors give their finest performances - but at the same time this deprives the film of that cathartic oomph audiences might expect.

Nevertheless first-time director Kim In-je, noted for his award-winning short "The End of the Road", shows potential as one to watch out for.

The title may have been inspired by the Herman Melville novel but it actually refers to a website operated by Defense Security Command. In 1990, Private Yun Seok-yeong created a stir by disclosing top secret military files and the incident serves as the motif of the story, which also takes place in the early '90s.

Hwang Jung-min, who has previously tackled the role of a Private Eye, shows off his knack for investigation as veteran journalist Lee. When a mysterious explosion occurs near a bridge in the outskirts of Seoul, he gets down to business and begins looking into the matter.

But one day, Yun (Jin Goo), an old friend he had lost touch with, pays him a visit. He claims that that the case was no accident and hands him a password-locked floppy disk along with some documents.

Lee puts together a special investigation unit with colleagues Sohn (Kim Sang-ho) and Seong (Kim Min-hee) to delve into the incident, only to be threatened by a group of unidentified men.

Meanwhile a state-run agency abruptly announces that North Korean spies were responsible for the bridge blast. But the Lee trio senses the existence of a dark shadow government that reveals sensational news in critical times, leading the entire country by the nose.

The film initially seems to have little to do with wrestling with whales, but alludes to how difficult it is to discern the vastness of the creature. The metaphor makes its way into the story several times, making Lee's struggles appear to be but a trivial skirmish in the face of powerful conspirers.

Thrill factors are seamlessly woven into the architectural narrative structure, while Hwang and a host of other esteemed actors bring urgency to the drama. The twists allow viewers to become completely immersed into the story, which retains a highly nuanced edge when it comes to the mystery government. The immaculate production values make the movie all the more engaging, and it's refreshing to see pagers instead of cell phones along with other period details that resurrect the '90s.

Yet the director opts for a more open-ended, albeit uninspiring, ending; things are neither resolved nor take an unexpected turn. Here, the film's ultra realism, initially working in its favor, is partly to blame. Characters are believable, as are the featured incidents, but play it too safe compared to the size of the conspiracy the film has dreamed up.

In theaters June 9. Runs 112 minutes. Rated 15 and over. Distributed by Showbox/Mediaplex.

Two-and-a-half out of four stars.

"Conspiracy flick is painstakingly real"
by HanCinema is licensed under a Creative Commons Attribution-Share Alike 3.0 Unported License.
Based on a work from this source