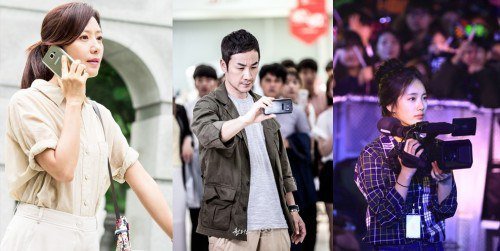 In the SBS drama "Mrs. Cop", she was a charismatic detective; however, this time, she returns as a program director.

"The Second Last Love" is the story of a public worker who hopes nothing special happens in his life and a program director who wishes something special to happen.

Kim Hee-ae takes on the role of Kang Min-joo. Not only is she single and beautiful enough to be an actress, she's also talented and bold. She falls into the path of romance with Ji Jin-hee.

Uhm Tae-woong's charisma reveals itself in the new SBS drama "Wanted". He takes on the role of Sin Dong-wook who directs the TV show "Jeong Hye-in's Wanted".

Uhm Tae-woong Is an inhumane character who would do anything for percentage and his career. He sends out real pictures of dead bodies and only looks ahead without thinking about the consequences. He makes people uncomfortable sometimes, but it's his obsession with stimulating scenes on his show.

Uhm Tae-woong brings out the dimensional character in Sin Dong-wook and synchronizes with him.

Suzy put down her trademark of being innocent and becomes a documentary producer. She plays the role of Noh Eul, a character who would do anything for money.

"Uncontrollably Fond" is the story of the reunion between two high school sweethearts of which the boy turns into a super star and the girl turns into a miserable documentary director.

Noh Eul used to be a nosy character but two accidents changed her and her life completely. She looks into the corruption of major head companies and she uses them as their weaknesses to rip them off of money.

According to sources, these 'broadcasting' dramas have become popular once again and it should be fun to contrast Kim Hee-ae, Uhm Tae-woong and Suzy at once.

"Contrasting between "The Second Last Love" Kim Hee-ae, "Wanted" Uhm Tae-woong, and "Uncontrollably Fond" Suzy"
by HanCinema is licensed under a Creative Commons Attribution-Share Alike 3.0 Unported License.
Based on a work from this source