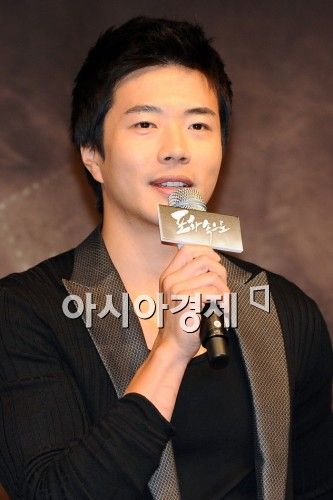 Korean actor kwon Sang-woo has been fined seven million won by a court for fleeing the scene of an accident in which Kwon collided into several vehicles in mid-June.

Judge Kim Se-jong of the Seoul Central District Court on Thursday handed a summary order of seven million won, equivalent to nearly 6,000 dollars, to the 33-year-old actor for the incident.

Two weeks ago, prosecutors had summarily indicted Kwon five million won for the same case, charging him with not taking immediate action for the damage he inflicted.

"It seems the justice department made the rare decision of imposing a higher fine on Kwon than the sum he was indicted for in consideration of the social responsibility he holds as a popular celebrity and the fact that he fled from the accident at the time", explained a court official.

A month ago, Kwon had made headlines after it became belatedly known that the actor had crashed into several vehicles including a police car near Seoul's Cheongdam-dong district during the early hours of June 12.

He had abandoned his vehicle and fled the scene soon after, only showing up at the police station two days later to undergo investigation for the incident.

No casualties were involved and there was no evidence that Kwon had been drunk driving at the time he caused the accident. Kwon himself had also denied driving under the influence of alcohol.

Kwon had shot to fame throughout Asia after starring in the 2003 TV series "Stairway to Heaven", which co-starred another Hallyu star Choi Ji-woo.

He recently starred in war pic "71-Into the Fire" and will be appearing in upcoming TV series "Daemul - Big Thing" alongside top Korean actress Go Hyun-jung.