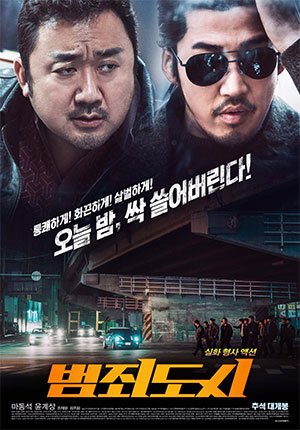 Action-packed crime flick "The Outlaws" has attracted over 5 million viewers since its release early this month, according to ticket sales tabulated by the Korean Film Council on Wednesday.

The film remains at the top of the box office for almost three weeks, still attracting over 100,000 spectators on Tuesday alone. It became a sleeper hit from word of mouth and great reviews by moviegoers who watched the film.

It deals with a violent war between a local gang and police officers in an attempt to bring peace to a neighborhood.

Starring Ma Dong-seok and Yoon Kye-sang, "The Outlaws" is a debut film for director Kang Yoon-Sung.