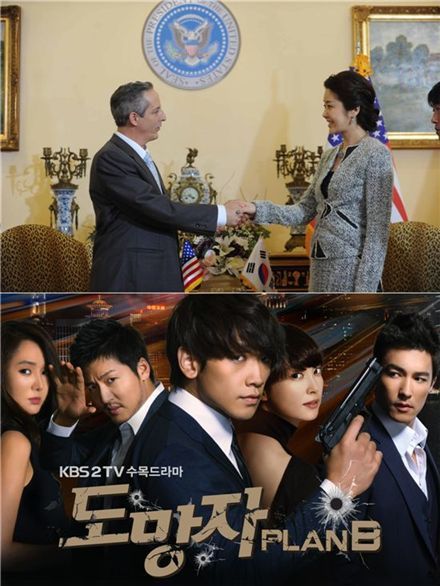 Above: Scene from "Daemul - Big Thing" [SBS]/ Below: Poster of "The Fugitive Plan B" [KBS]

"Daemul - Big Thing" which follows one woman's quest to rise to the presidency recorded an average viewership rating of 24.35 percent this week, a slight drop from last week's 25 percent, according to the data released by Total National Multimedia Statistic (TNms) on Friday.

In this week's episode the heroine Seo Hye-rim (Go Hyun-jung) announces that she is quitting her post as a lawmaker after realizing that her election pledge has only been used to promote a reclamation project in Namhae Island that drove the islanders to leave their home.

Her trustworthy friend Prosecutor Ha Do-ya (kwon Sang-woo) too gets into trouble after falling into a trap set up by politician Cho Bae-ho (Park Geun-hyung).

The second runner, KBS2's "The Fugitive Plan B", recorded an average rating of 13.8 percent, a slight gain from the previous 12 percent mark, according to TNmS' figures. AGB Neilson said the drama scored a mean of 12.4 percent.

The two parties -- Ji-woo (Rain) the private detective and Jin-yi (Lee Na-young), and Hwang Mi-jin's (Yoon Son-ha) gang -- compete to find hidden gold which is later discovered in Mt. Geomdan. However Hwang gets shot by her boss for knowing too much and the gold disappears once again.

MBC's "Home Sweet Home" collected an average rating of 6.5 percent, improving from last week's 5.2 percent on TNmS' survey. The drama, which premiered two weeks ago, has seen its ratings gain steadily despite being up against heated competition.

The series starring top Korean actresses Kim Hye-soo and Hwang Shin-hye, showing how trust between a married couple shakes and misunderstandings lead to distrust, yielded an average rating of eight percent this week. 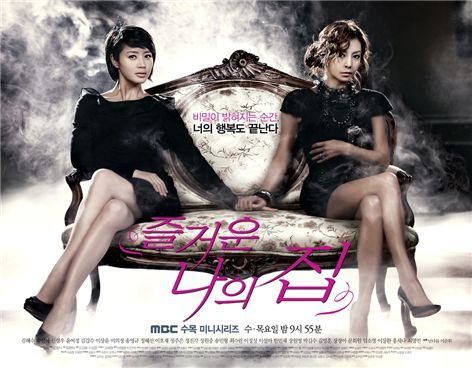 ""Daemul - Big Thing" remains atop TV charts but sees slight drop in ratings"
by HanCinema is licensed under a Creative Commons Attribution-Share Alike 3.0 Unported License.
Based on a work from this source