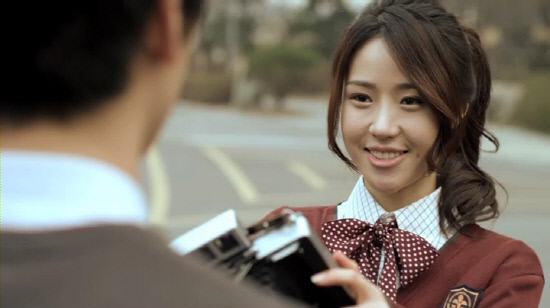 Jiyul (Yang Jeong-yoon) from the girl group Dal Shabet has been cast in the lead role for a short-film.

She has recently completed making the movie "Her Story" directed by Yoon Tae-sik. She takes on the role of Hanna, who takes Polaroid pictures of memorable places with her boyfriend.

Jiyul showed an outstanding performance very much unlike her charismatic image from the song "Hit U", showing that she could be youthful and caring, with rookie actor Ji Sang-hyeok as her boyfriend. She managed to pull of the emotional scene of missing her boyfriend in Hawaii and even attempted at a kiss scene for the first time in her life.

Jiyul played the leading female in the music videos for Four Men & Me's "The Man and The Woman" and Dal Shabet's "Hit U". She also made a cameo appearance in the movies "Wonderful Radio" and "Papa - Movie".

Meanwhile, Jiyul and her girl group Dal Shabet are making their fourth mini album, which features the single"Hit U".

"Dal Shabet's Jiyul cast for short film "Her Story""
by HanCinema is licensed under a Creative Commons Attribution-Share Alike 3.0 Unported License.
Based on a work from this source