Daniel Henney: "I Like a Woman Who Is Proud of Being Herself"" 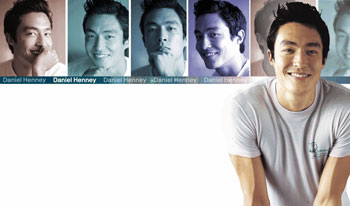 "Clean-cut features, killer body, innocent smile, a perfect combination of West and East, His name is Daniel Henney. I said he is the one".

It is part of "the song in praise of Daniel" which is gaining popularity on the internet. Daniel Henney (27) is the one in the song which is adapted from a song in praise of Gi Pa Rang called "Chan Gi Pa Rang Ga" (Gi Pa Rang is a member of youth elite group of Shilla dynasty). In the MBC drama "My Name is Samsoon Kim", he plays Henry Kim, a radiology doctor who shows dedicated love for Hee-jin (starring Jung Ryeo-won), who came to the U.S for cancer treatments.

An increasing number of female fans are using "DanielLove" and "MyLoveHenny" as their nicknames in the cyberspace. The "Daniel Effect", a new phrase, has been coined as well.

Female fans say there are three effects constituting the "Daniel Effect": his exotic and sexy appearance which you can find only in models for prestigious foreign fashion magazines (Shock effect), his innocent smile which neutralizes negative feelings people might have for his too-perfect appearance (Neutralization effect) and his devotion to one woman even though he is such a perfect guy (Synergy effect).

Dong-A Ilbo sat down with him, a new face to many readers, at Cheongdam-dong, Seoul on June 28.

From an Ordinary College Student to a Promising Fashion Model-

Daniel Henny can't speak Korean. The first question for him was the one his countless fans want us to ask him.

-"Do you have a girlfriend?"

-"I'm very satisfied as things are now. I'm too busy. So I don't think that I would make a good boyfriend. I like things as they are now".

He also said, "I like a woman who is proud of being herself. I like someone who can make her presence felt by others".

His mother is a Korean adoptee as in the drama. His mother, Christy Henney (48), was adopted to the U.S. from an orphanage in Busan before her first birthday. His father is a British American engineer, Philip Henney (58).

"My mother always keeps a traditional Korean bridal doll wearing rainbow-striped clothes. I don't know where she got that. She told me to visit Busan when I go to Korea".

It was his friend who brought this dramatic change to his life as an ordinary college student.

"I was in the car at a parking lot, waiting for my friend to come out of his model audition. Then an agent approached and asked me 'Why don't you make some money and buy a new car?' Everything began right there".

He worked as a model not only in the U.S. but also in Taiwan and Hong Kong in 2002. And in 2003 he became successful, participating in the Paris and Milan Fashion Collections show.

From Fashion Model to Henry Kim-

After making appearances in several commercials such as Digital Camera Olympus (with Jun Ji-hyun) and Air Conditioner Klasse (with Kim Tae-hee), his name became known to Kim Yoon-cheol, the producer of "My Name is Kim Sam-soon". Kim made a call to him. At that moment, Daniel was at the airport going back to the U.S.

"After being offered the job, I went to the U.S and sent my video tape showing my performance. I took acting classes at the Deena Levy Studio, an acting school in New York, whenever I could despite my busy schedule as a model. I even performed in off-Broad way plays several times".

The dramatic casting story created a dramatic character. Can he love just like Henry Kim, not selfishly, but sacrificing love in real life?

(Firmly) "I can, Love is trust. And based on the trust, you can have love".

He answered in earnest. I asked what the future holds for the actor Daniel Henny.

"I want to play a psychotic Bad Guy. I want to become an actor who earns recognition not for his appearance but for his performance just like Brad Pitt. First, I will focus on learning Korean so that I can make Korea an indispensable part of my life.