Danny Ahn back in 'Closer' 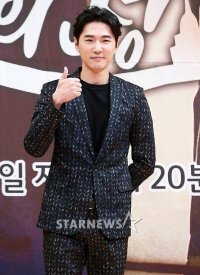 Danny Ahn is back in "Closer", reprising his theater debut in March.

The actor said he decided to try out "Closer" again, instead of going for a new one, after playing supporting roles in two other plays.

"I wanted to see how my acting has improved or changed after some time and experience", said Ahn in a press meeting on Tuesday.

A former member of popular boy band G.O.D., Ahn has been pursuing a career in acting since making his debut in the 2007 movie "Crazy For Wait" ("The Longest 24 Months"). After the movie, Ahn moved on to theater and has been building experience in acting.

In "Closer", now playing in Daehangno, Ahn once again plays Dae-hyun, the attractive but selfish writer who falls in love with two women at the same time.

"I feel much more comfortable on the stage now than before, when I was busy memorizing the lines", said Ahn, laughing.

The actor scored himself 20 out of 100 for his debut performance and humbly added that he still does not feel that his acting is good enough.

But Ahn said doing the piece for the second time has definitely made him understand and interpret the role better.

"Closer" has become one of the hit plays at Daehangno over the years since premiering in 2005 in Korea. The play deals with the stories of two women and two men who are not afraid to express their frank views about love.

The play was originally created by British playwright Patrick Marber and premiered in London in 1997.

It is better known to many as the 2005 film version starring Julia Roberts, Natalie Portman, Clive Owen and Jude Law,

"Danny Ahn back in 'Closer'"
by HanCinema is licensed under a Creative Commons Attribution-Share Alike 3.0 Unported License.
Based on a work from this source