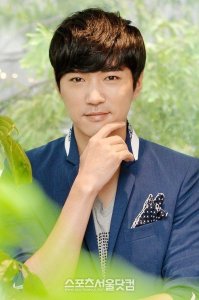 Danny Ahn, former member of pop group g.o.d., will continue to show his theatrical streak in a second stage performance. The 29-year-old is currently appearing in his play debut "Closer" and will star in the musical "Nasaengmun" next Month, production company Showplay announced Thursday.

When the J.Y. Park (aka. JYP)-produced boy band disbanded several years ago, the five members have pursued individual careers in the entertainment business.

Ahn crossed over to acting, starring in the romantic comedy movie "The Longest 24 Months" opposite popular actors Son Tae-young and Jang Keun-suk.

Last month, he appeared onstage for the first time through "Closer", and he will mix in his singing skills for the upcoming musical. Inspired by a short story by Japanese writer Ryunosuke Akutagawa, "Nasaengmun" premiered in Korea in 2003. It is about the conflicting testimonies by different characters on the same event.

"Danny Ahn Takes Second Stage Role"
by HanCinema is licensed under a Creative Commons Attribution-Share Alike 3.0 Unported License.
Based on a work from this source