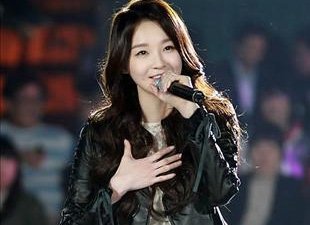 Already having taken her first few steps in acting, power vocalist duo Davichi's Kang Min-kyung has been cast for her next project: a KBS drama.

A KBS representative confirmed on June 27th that Kang will indeed to playing a role in the upcoming new drama "Haeundae Lovers". She has already attended her first script reading on the 25th. The rep continued on, praising Kang's image and beauty which goes well with the character she's been cast as.

Kang will play a secretary at a hotel named Hwang Joo-hee, who was a fellow classmate of the character Go So-ra (played by Cho Yeo-jeong). Go is the daugther of a gangster who falls in love with a Seoul prosecuter, Lee Tae-sung (played by Kim Kang-woo).

Hwang is beautiful, and knows it, and uses most of her income to maintain that beauty. Hwang also has a crush on the elite lawyer Choi Joon-hyuk (played by Jung Suk-won), the vice president of the hotel she works at.

The drama will be filmed in Busan. This romantic comedy will start airing after "Big" on August 13th.